PUURS, Belgium—Adelis Silva charged into a crowd of young people, some in hazmat suits and animal costumes, and shouted: “Who wants a hug?”

The teens and 20-somethings had congregated in this Belgian hamlet to celebrate Holi, the Hindu holiday that welcomes spring—just as autumn approached Europe. They came to celebrate the victory of good over evil and douse each other with iridescent powders, just like in India. Organizers claim the rainbow hues erase social, religious and racial differences. 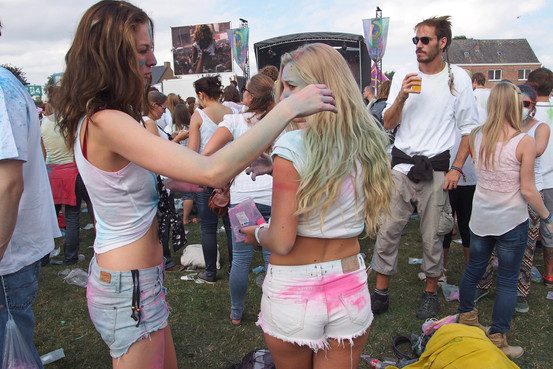 Holi–the Hindu festival that celebrates the arrival of spring–has spread from India to Europe, where the religious holiday has taken an even more colorful turn.

Holi parties are springing up from England to South Africa, luring big-hearted partygoers like Mr. Silva, a Brazilian trekking across Europe. Touting an intoxicating blend of Woodstock and Bollywood, the gatherings can draw more than 10,000 people.

But all that amity and togetherness has sparked a fight between the leading commercial Holi festival organizers. While revelers cavort in colorful joy, their hosts are dickering over profits, festival names and even the ingredients of the powders they sell.

“It’s a sort of Holi war,” says Michael Hasemann, an event manager in Lübeck, Germany, who helps local organizers stage Holi festivals. “Everybody is trying to shaft everybody else to become the king of Holi.”

Just last year it was a happy Holi commune. At the time, five Berlin men staged the first commercial Holi festivals in Germany, inspired by images of the Indian original and annual celebrations of a Krishna temple in Spanish Fork, Utah.

Technicolor pictures of their open-air parties quickly conquered the Facebook and Instagram timelines of thousands of teens and tweens.

“There’s an atmosphere of love in the air,” is how Maxim Derenko, one of the five founders, describes the mood at the festivals.

But a dispute over the business turned the Holi lovefest into a slugfest, and one of the men, Stephan Dau, teamed up with his brother to set up Holi One. Others, led by Mr. Derenko, established themselves as Holi Festival of Colours.

Since the split, the two organizers have been engaged in a race to bring their Holi events to the rest of Europe, South Africa and, the weekend after Thanksgiving, all the way to Florida.

The festivals’ popularity has drawn in other professional event managers, such as Mr. Hasemann, who hold separate events, and entrepreneurs. Marcel Bodewig, for example, who usually sells support systems for call centers, realized there was a business opportunity in selling Holi powder, known as gulal. 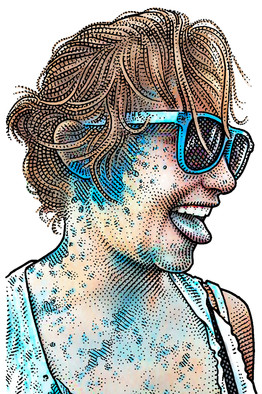 Big companies such as Sony Corp. have also not been blind to Holi’s allure, releasing commercials this year featuring scenes from the Indian festival.

Because they don’t rely on expensive headline acts, commercial Holi events can pull in much bigger profits than ordinary music festivals. A hot Holi with more than 10,000 guests can leave organizers with as much as 80% in profits on revenues of up to $500,000 from ticket sales and merchandising, says Mr. Hasemann.

Messrs. Dau and Derenko declined to say how much money they make from their events, but both said their costs were higher.

With such sums at stake, competition has taken a decidedly unholy turn.

When Holi Festival of Colours tried to secure the rights to their name with the European Union’s trademark office, Holi One objected, claiming that the phrase “festival of colors” was used for Holis around the world.

So far, the trademark office’s database shows it has received at least 10 applications over the past year containing the terms Holi or “colour festival,” ranging from “Holi Powder,” to “Holi Peace” and “Holi Run.”

Mr. Bodewig, the call-center IT expert turned powder merchant, got a court to order the Daus to stop suggesting other gulals weren’t safe because they hadn’t been authorized as cosmetic products.

Mr. Dau says he was merely concerned about the safety of festival goers. “Some competitors at times only sold plastic bags with who knows what substance inside,” he says.

Hindu groups are up in arms over what they see as rampant commercialization of their religious holiday.

Commercial Holi festivals, such as this one in the Belgian town of Puurs on Aug. 31, have swept Europe this summer, sparking fierce competition among festival organizers and complaints from the Hindu community. Gabriele Steinhauser/The Wall Street Journal

“They drink, they party, they do whatever,” Radj Bhondoe, chairman of the Hindu Council of the Netherlands, says of the attendants at a recent Holi in Amsterdam.

Mr. Bhondoe says he doesn’t buy the organizers’ claim that their events promote the spirit of unity that is central to the traditional holiday. “I’m afraid that’s not the real model of their business. Their business is business. It’s making money,” he says. As for holding Holi in summer or fall: “You’re not going to celebrate Christmas in July. It’s absurd.”

At the festival in Puurs, the atmosphere was more raving than religious—although the free-flowing alcohol, hot afternoon sun and wild dancing certainly brought people closer together.

Between hourly countdowns to toss the powder, designed to maximize the picture-perfect effect, party goers rocked out to Bhangra beats emanating from a massive stage or lined up for beers or sparkling wine. They had shelled out between €27.99 and €34.99, or about $38 to $47, for tickets, while five bags of Holi powder cost €10.

Alex Scott, 23 years old, and Niko Zerang, 21, two Chicagoans on a trip through Europe, were digging into some hot dogs and french fries before heading back into the crowds. “I saw the video on YouTube and then we came here,” said Mr. Scott, his face coated with a layer of green and blue powder.

Like many others, Messrs. Scott and Zerang were attracted by the festival’s rainbow hues and had little notion of its roots. “I had no idea it was an Indian tradition,” said Mr. Zerang.

In Europe, some organizers say, Holis will likely turn out to be more fad than tradition.

“It will continue next year and then it’s over,” says Mr. Hasemann. “Once you’ve tossed color into the air five times you don’t necessarily need to do it again.”