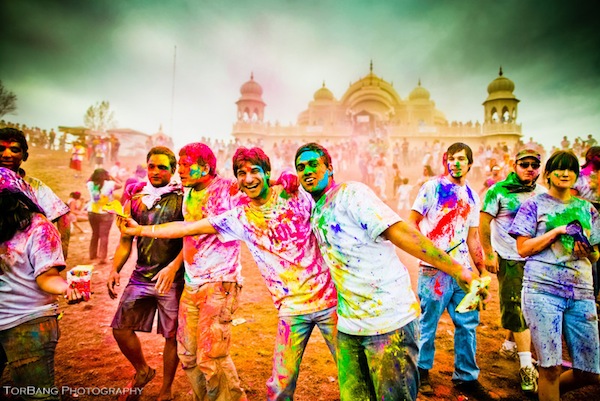 Imagine sweet mantra music swelling massively as billowing clouds of vibrant red, green, yellow, blue, black, and silver dust swirl over the heads of thousands of jubilant people, gently descending upon them like a rainbow blessing. That’s what attendees at the October 19th Festival of Colors at the Dixie Sun Bowl in St. George Utah can expect to experience. Now in its 24th year, the Festival of Colors is a joyous spiritual celebration that combines mantra music, yoga and vegetarian food with all the multi-hued fun and excitement of India’s traditional Holi holiday. 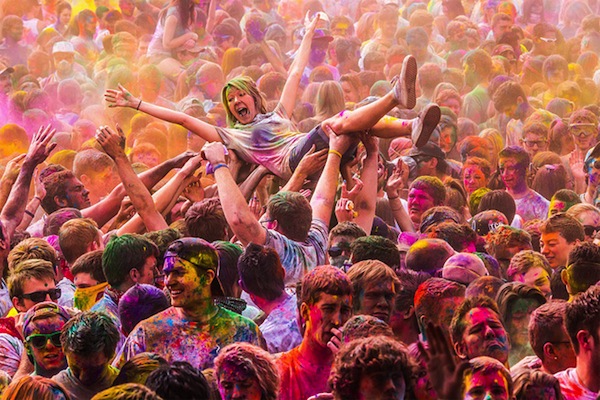 The main feature of Holi is the throwing of brightly colored, cornstarch-based powders, and the Festival of Colors has carried that tradition to the USA. Participants typically end up grinning from ear to ear and vividly bestrewn with electric colors, like beneficent Indian deities.

“Most people come initially because of the colors, in a spirit of fun,” says festival organizer Caru Das of the Sri Sri Radha Krsna Temple in Spanish Fork, Utah. “And the colors do release inhibitions and bring people closer together. You view people less judgmentally and accept them more unconditionally. You don’t care who they are or where they come from. They’re just fellow entities on Planet Earth. The colors have that effect. But people who have come to the festivals for several years tell me that it’s no longer the colors that bring them as much as the music and the chanting. The bands that we present play soul kirtan, dubstep, reggae, rock and roll, blues . . . all different kinds of styles. But the lyrics are all names of God, mostly from the Sanskrit. And these mantras have a particularly powerful effect in raising consciousness.” 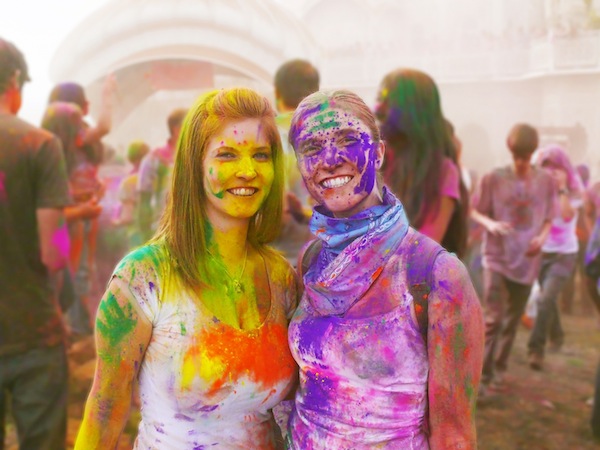 Recent Festivals of Colors have attracted massive crowds, growing by leaps and bounds over the years. “At our first festival in 1989, we had maybe four devotees, two Brigham Young University students and three Indians,” Caru Das recalls. “And from there it has swelled to the point where we had 75,000 people over two days in 2012.” 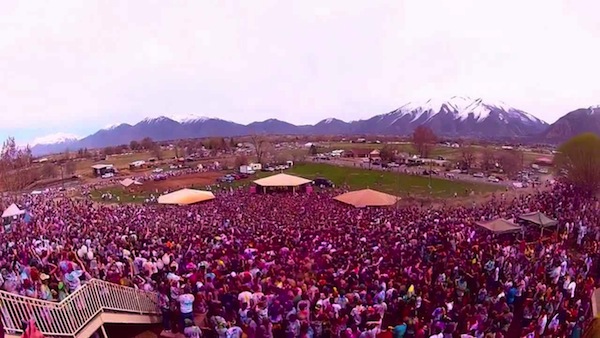 The Festival of Colors is one of the best bargains on the mantra music circuit. Its affordability reflects the underlying populism of Holi in India, which blurs the distintion between rich and poor. “In other countries, pressure builds up between the haves and the have nots,” says Caru Das, “and then they often have a revolution, which may be bloody in some cases. But in India, once a year, everyone lets off steam by putting colors on eachother, rich or poor, and it just seems to be a nice way of releasing social pressure. In India, though, Holi has evolved into a lot of rowdiness. Whereas our events are drug, alcohol and tobacco free; so it’s very ebullient, but peaceful at the same time.”

The Holi festival takes its name from the mythological story of the Vishnu devotee Prahlad’s triumph through faith over the demoness Holika. The deity Brahma had granted Holika a boon, that she couldn’t be burned by fire. She tried to use this kill Prahlad, by dragging him into a fire. But it was Prahlad who emerged from the flames unscathed, while Holika perished.

“Holika’s boon was from Brahma, the creator of the universe,” Caru Das explains, “but Prahlad was chanting the name of Vishnu, who creates millions of universes and millions of Brahmas. So when the two boons confronted eachother, Holika’s collapsed, and on that occasion she burned and Prahlad walked out unharmed.”

Tradition regards Krishna as a reincarnation of Vishnu, which means Holi also has a special resonance for Krishna devotees. “Krishna observed Holi when he was on the planet 5,200 years ago,” says Caru Das. “In those days, they used to grind up flower petals and throw them on eachother. Of course we can’t afford to do that now, hence the cornstarch colors. But it was a way that the Lord had of deepening and enriching the love that he shared with his devotees and the mutual love between devotees. And it produces the same effect in this day and age as well.”

In India, Holi is celebrated as a springtime festival. But the Festival of Colors organizers see no reason to wait until once a year to host a massive gathering of the rainbow tribes. So events are held in all seasons, as exemplified by the autumnal, October 19th event in Utah.

“Our focus is not to celebrate ‘Indian’ holidays, per se,” says Caru Das. “Our focus is to introduce people to the name of the Lord. And that can be done anytime, anyplace, under any pretext.”

Check out the bhakti action in this clip of MC Yogi with the Kirtaniyas at a recent Festival of Colors event: –